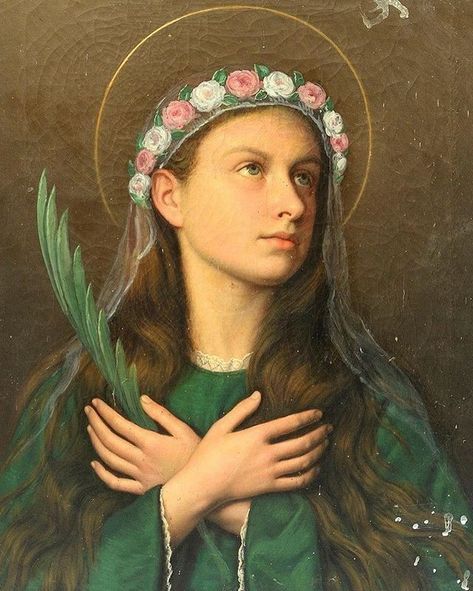 This little Italian girl, who before reaching the age of twelve was slain for having preferred death to sin, was beatified and canonized before fifty years had passed. Saint Maria Goretti, born in October, 1890 in the small hilltop village of Corinaldo near Ancône, was the second of the six living children of a very pious poor family. Her mother consecrated the infant to the Blessed Virgin on the day of her baptism. Her courageous parents labored under the sign of Christian poverty to support the children, but by 1896 their little plot of land proved insufficient to feed the growing family. The father decided they would move down to the plains of Rome, where it was said that fertile farm land could be rented at low cost. The move to Ferriere di Conca, near Nettuno, proved fatal to the good Luigi, who after only four years, exhausted by the unhealthy climate, the heavy heat and his hard labor, died a Christian death.

His courageous widow could not follow his dying admonition to return to Corinaldo, since their contract obliged her to pay what she owed to their employer. Maria, nine years old and deeply affected by her father’s death, seconded her mother’s labor in the fields by taking over the care of her four younger brothers and sisters. She was an angelic child whose piety was observed by all who knew her. Her fervor won her the grace to make her First Communion, as she begged to do, with the other children. When she asked that permission, her mother told her she did not know how to read or write, and they did not have the means to buy the shoes, robe, and veil she would need. Maria replied that in the town a lady who knew how to read would teach her, and on Sundays she could go to a village where the priest taught catechism to all the children, and she was sure that God in His providence would care for her material needs. She was right; she passed the questioning session by the Archpriest of Nettuno with honors, and kind benefactors gave what she needed.

Living conditions for the little family of orphans were very difficult; they shared a kitchen with another family. This other one was motherless: the mother had died in an asylum, and the father was a drunkard. His son, 19 years old, began to pay much attention to Maria, and the little girl, who wished to remain pure for her beloved Jesus, begged her mother never to leave her alone. But one day in the torrid heat of summer, while Maria watched her baby sister and prepared the meal, Alessandro left the field where everyone was working and went to the house with evil intentions. No one heard Maria’s cries for help; it was only an hour or so later that a younger brother of Alessandro entered and found her bathed in her blood on the floor. Her love of purity had cost her fourteen grievous wounds, nine of which were very profound. She lived long enough to tell the priest who came to her in the hospital that she forgave her assassin and wanted him to be with her in Paradise. She received the Last Sacraments in peace and joy, dying on July 6, 1902.

The story did not end there. Alessandro was condemned to thirty years of prison. Gruff and totally impenitent, he was mistrusted by the guardians. But the bishop of the diocese, Monsignor Blandini, wanted to save his soul, and went to the prison, asking to talk with him. My son, he said, your bishop wants to greet you and comfort you. I didn’t ask for your visit, and I don’t need comfort or your sermons, was the reply. But when the prelate told Alessandro how, during her last minutes, Marietta had forgiven him and wished to have him near her in heaven, the nonchalant young man was overcome. That is not possible! he exclaimed. Before the bishop left, Alessandro had fallen into his arms, weeping; and in the hours of solitude which followed, he began to pray. Three years before the end of his term, for his good behavior he was set free, and in 1937, at the age of 55, he went to see the mother of the little victim. When he fell on his knees and begged her pardon, like her little daughter she gladly forgave him. They went to Communion in the little village church at Christmas; and there was no inhabitant who did not rejoice with a Christian joy in this new proof of the sanctity of Maria, to whom they all attributed his wondrous conversion. Pope Pius XII beatified the new Saint Agnes in April 1947, and in June of 1950, she was inscribed among the Saints.