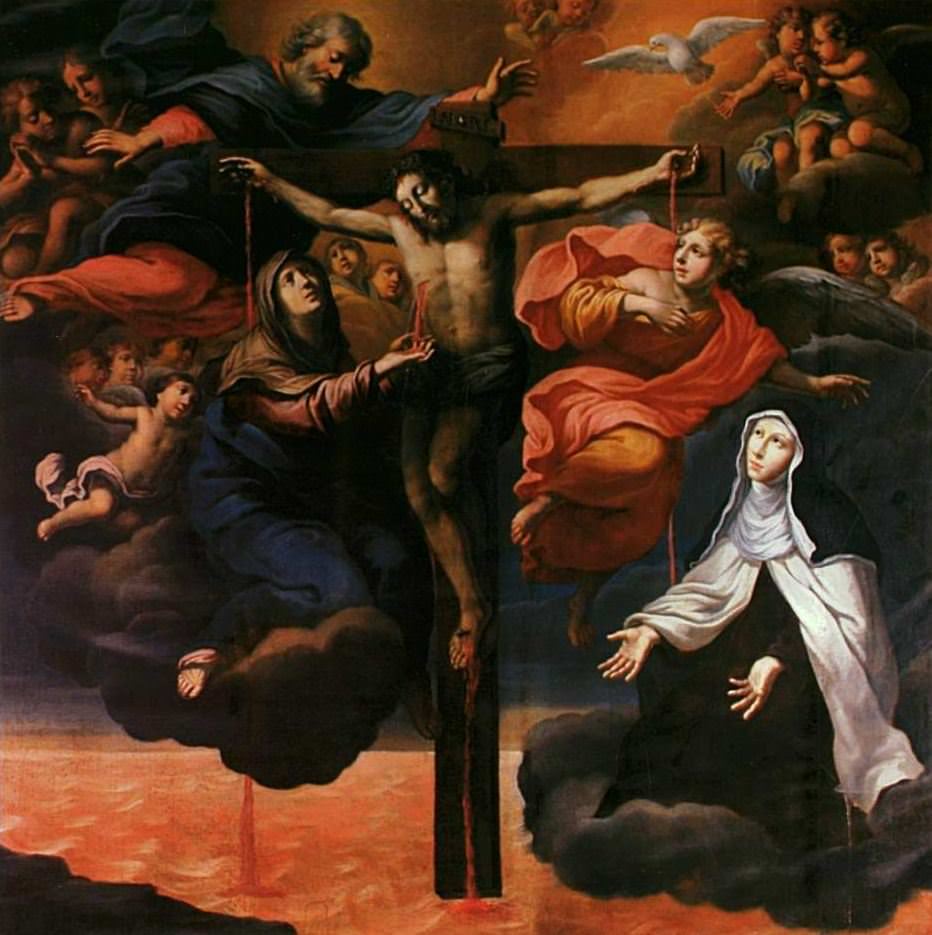 Meditation on the Most Precious Blood of Jesus

The Precious Blood in Its Earthly Origin

The Precious Blood of Jesus, flowing through His veins while an infant in His Holy Mother’s womb, was derived from Mary. He lived with her life. She furnished from her immaculate body the Precious Blood that Jesus shed for us. How close must have been the union of Jesus and Mary! Can we wonder at her surpassing holiness, when she not only carried her God within her womb, but furnished the very Body with which His Humanity clothed itself!

We also find in this thought a fresh proof of Mary’s unblemished purity. It is repugnant to our reverence for the Second Person of the Blessed Trinity to imagine Him dwelling in a womb that had ever been defiled with sin, and much more to suppose that the Precious Blood which flowed in His veins and was the price of our redemption did not come from a source as pure as God could make it. Make an act of faith in the Immaculate Conception of Mary, and thank God for that privilege conferred on her.

We must also remember that Jesus’ Blood was wholly that of Mary. It was not as in the case of other children who have an earthly father. The Body of Jesus was formed in Mary’s womb by the operation of the Holy Ghost, and naturally Jesus was altogether hers. In Heaven, the Body that Jesus has is still the Body derived from Mary, and their union is now closer than ever. In Holy Communion, Jesus is altogether ours. Do we conform ourselves to Him as Mary did?

Born at Mercatello in the Duchy of Urbino, Italy, 1660; died at Citt’ di Castello, 9 July, 1727. Her parents, Francesco Giuliana and Benedetta Mancini, were both of gentle birth. In baptism she was named Ursula, and showed marvelous signs of sanctity. When but eighteen months old she uttered her first words to upbraid a shopman who was serving a false measure of oil, saying distinctly: “Do justice, God sees you.” At the age of three years she began to be favoured with Divine communications, and to show great compassion for the poor. She would set apart a portion of her food for them, and even part with her clothes when she met a poor child scantily clad. These traits and a great love for the Cross developed as she grew older. When others did not readily join in her religious practices she was inclined to be dictatorial. In her sixteenth year this imperfection of character was brought home to her in a vision in which she saw her own heart as a heart of steel. In her writings she confesses that she took a certain pleasure in the more stately circumstances which her family adopted when her father was appointed superintendent of finance at Piacenza. But this did not in any way affect her early-formed resolution to dedicate herself to religion, although her father urged her to marry and procured for her several suitors as soon as she became of marriageable age. Owing to her father’s opposition to her desire to enter a convent, Veronica fell ill and only recovered when he gave his consent. END_OF_DOCUMENT_TOKEN_TO_BE_REPLACED

Born on October 16, 1890, in Corinaldo, in the Ancona Province in Italy, her farmworker father moved his family to Ferrier di Conca, near Anzio. When he died of malaria, Maria’s mother had to struggle to feed her children.

Maria’s mother, brothers, and sisters worked in the fields while she cooked, sewed, kept the house clean, and watched her youngest sister Teresa. Though the family’s circumstances were extremely difficult, they were very close and loved God.

On July 5, 1902, Maria was sitting outside the steps of her home sewing her 18-year-old brother or neighbour -it is unclear which – Alessandro’s shirt while he threshed beans in the barnyard. As she concentrated on her sewing, Alessandro surprised her and grabbed her from her steps. When he tried to rape her, Maria cried that it was a mortal sin and warned he would go to hell. END_OF_DOCUMENT_TOKEN_TO_BE_REPLACED

John Fisher is usually associated with Erasmus, Thomas More and other Renaissance humanists. His life, therefore, did not have the external simplicity found in the lives of some saints. Rather, he was a man of learning, associated with the intellectuals and political leaders of his day. He was interested in the contemporary culture and eventually became chancellor at Cambridge. He had been made a bishop at thirty-five, and one of his interests was raising the standard of preaching in England. Fisher himself was an accomplished preacher and writer. His sermons on the penitential psalms were reprinted seven times before his death. With the coming of Lutheranism, he was drawn into controversy. His eight books against heresy gave him a leading position among European theologians.

In 1521 he was asked to study the problem of Henry VIII’s marriage. He incurred Henry’s anger by defending the validity of the king’s marriage with Catherine and later by rejecting Henry’s claim to be the supreme head of the Church of England.

In an attempt to be rid of him, Henry first had him accused of not reporting all the “revelations” of the nun of Kent, Elizabeth Barton. John was summoned, in feeble health, to take the oath to the new Act of Succession. He and Thomas More refused because the Act presumed the legality of Henry’s divorce and his claim to be head of the English church. They were sent to the Tower of London, where Fisher remained fourteen months without trial. They were finally sentenced to life imprisonment and loss of goods.

When the two were called to further interrogations, they remained silent. Fisher was tricked, on the supposition, he was speaking privately as a priest, and declared again that the king was not the supreme head. The king, further angered that the pope had made John Fisher a cardinal, had him brought to trial on the charge of high treason. He was condemned and executed, his body left to lie all day on the scaffold and his head hung on London Bridge. More was executed two weeks later.

His belief that no lay ruler has jurisdiction over the church of Christ cost Thomas More his life.

Beheaded on Tower Hill, London, July 6, 1535, he steadfastly refused to approve Henry VIII’s divorce and remarriage and establishment of the Church of England.

Described as “a man for all seasons,” More was a literary scholar, an eminent lawyer, gentleman, father of four children and chancellor of England. An intensely spiritual man, he would not support the king’s divorce from Catherine of Aragon in order to marry Anne Boleyn. Nor would he acknowledge Henry as supreme head of the church in England, breaking with Rome and denying the pope as head.

More was committed to the Tower of London to await trial for treason: not swearing to the Act of Succession and the Oath of Supremacy. Upon conviction, More declared he had all the councils of Christendom and not just the council of one realm to support him in the decision of his conscience.

Four hundred years later, in 1935, Thomas More was canonized a saint of God. Few saints are more relevant to our time. The supreme diplomat and counsellor, Thomas More did not compromise his own moral values in order to please the king, knowing that true allegiance to authority is not blind acceptance of everything that authority wants. Henry himself realized this and tried desperately to win his chancellor to his side because he knew More was a man whose approval counted, a man whose personal integrity no one questioned. But when Thomas resigned as chancellor, unable to approve the two matters that meant most to Henry, the king felt he had to get rid of Thomas.

Excerpted from Saint of the Day, Leonard Foley, O.F.M.

NINETEEN priests and religious men, who were taken by the Calvinists in Gorcum, after suffering many insults, were hanged on account of their religion at Bril, on the 9th of July, 1572. Of these, eleven were Franciscan friars, called Recollects, of the convent of Gorcum, amongst whom were Nicholas Pick the guardian, and Jerom Werden, vicar of the same convent. The former was thirty-eight years old, an eminent preacher, and a man endued with the primitive spirit of his order, especially the love of holy poverty and mortification. He feared the least superfluity even in the meanest and most necessary things, especially in meals; and he would often say: “I fear if St. Francis were living, he would not approve of this or that.” He was most zealous to preserve this spirit of poverty and penance in his house, and he used to call property and superfluity the bane of a religious state. His constant cheerfulness rendered piety and penance itself amiable. He often had these words in his mouth: “We must always serve God with cheerfulness.” He had frequently expressed an earnest desire to die a martyr, but sincerely confessed himself altogether unworthy of that honour. The other martyrs were a Dominican, two Norbertins, one Canon Regular of St. Austin, called John Oosterwican, 1 three curates, and another secular priest.  END_OF_DOCUMENT_TOKEN_TO_BE_REPLACED